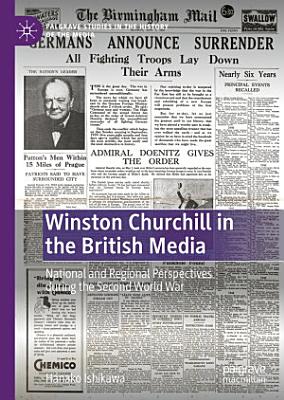 The book explores how Churchill was portrayed in the UK press during the Second World War, comparing his depictions in Scottish, Welsh, Northern Irish, and provincial English newspapers. By using a variety of newspapers from these areas, it examines local opinions about Churchill at the time he was the wartime prime minister. It analyses how Churchill was received and depicted by newspapers in the UK and why differences in these depictions emerged in each area. It contributes to the study of public opinion in the war and of Churchillâ€™s reputation, of the British media, as well as to the study of the notion of Britishness, focusing on local perspectives.

Winston Churchill in the British Media

Authors: Hanako Ishikawa
Categories: History
The book explores how Churchill was portrayed in the UK press during the Second World War, comparing his depictions in Scottish, Welsh, Northern Irish, and prov

Authors: Richard Toye
Categories: History
Before Winston Churchill made history, he made news. To a great extent, the news made him too. If it was his own efforts that made him a hero, it was the media

Media and the British Empire

Authors: C. Kaul
Categories: History
'The only true history of a country', wrote Thomas Macaulay, 'is to be found in its newspapers'. This book explores how the media shaped and defined the economi

Authors: Richard Toye
Categories: Biography & Autobiography
A books which traces Churchill's life in the news from cradle to grave, showing how tensions between tradition and novelty played into his constantly evolving m

Authors: Binakuromo Ogbebor
Categories: Language Arts & Disciplines
This open access book provides a detailed exploration of the British media coverage of the press reform debate that arose from the News of the World phone hacki

"The Man Who Saved the World"? - How the British Think About Winston Churchill Today

Authors: Lynsey Calver
Categories: History
Banned History is all the juicy bits of History which were excluded from your lessons at school. It unashamedly probes into the darker side of some of Britainâ€

Authors: Philip Woods
Categories: History
This book explores how the media was used by the armed forces during the India-Burma campaigns of WWII to project the most positive image to domestic and intern