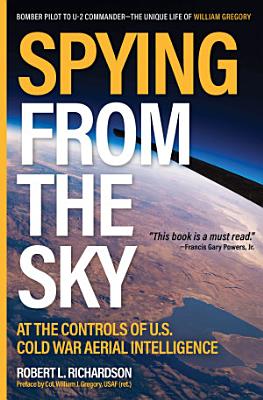 The “must read” story of America’s first high-altitude aviation program and one of its pilots (Francis Gary Powers Jr.). William “Greg” Gregory was born into a sharecropper’s life in the hills of North Central Tennessee. From the back of a mule-drawn plow, Greg learned the value of resilience and the importance of determined living. Refusing to accept a life of poverty, he found a way out: a work-study college program that made it possible for him to leave farming behind forever. While at college, Greg completed the Civilian Pilot Training Program and was subsequently accepted into the US Army’s pilot training program. Earning his wings in 1942, he became a P-38 combat pilot and served in North Africa during the summer of 1943—a critical time when the Luftwaffe was still a potent threat, and America had begun the march northward from the Mediterranean into Europe proper. Following the war, Greg served with a B-29 unit, then transitioned to the new, red-hot B-47 strategic bomber. In his frequent deployments, he was always assigned the same target in the Soviet Union: Joseph Stalin’s hometown of Tbilisi. While a B-47 pilot, Greg was selected to join America’s first high-altitude program, the Black Knights. Flying RB-57D aircraft, he and his team flew peripheral “ferret” missions around the Soviet Union and its satellites, collecting critical order-of-battle data desperately needed by the US Air Force at that time. When the program neared its design end—and following the Gary Powers shoot-down over the Soviet Union—Greg was assigned to command of the CIA’s U-2 unit at Edwards AFB. Over this five-year command, he and his team provided critical overflight intelligence during the Bay of Pigs, the Cuban Missile Crisis, the Vietnam buildup, and more. He also became one of the first pilots to fly U-2s off aircraft carriers in a demonstration project. Spying from the Sky is the in-depth biography of William Gregory, who attended the National War College, was assigned to the reconnaissance office at the Pentagon, and was named vice-commandant of the Air Force Institute of Technology (AFIT) before retiring from the force in 1972.

Spying from the Sky

Spies In The Sky

Authors: Taylor Downing
Categories: History
SPIES IN THE SKY is the thrilling, little-known story of the partner organisation to the famous code-breaking centre at Bletchley Park. It is the story of the d

Spies in the Sky

Authors: Pat Norris
Categories: Nature
Reviews the history of the military's use of satellites since the flight of Sputnik 1, discusses lesser-known nuclear powers such as the United Kingdom and Fran

A Spy in the Sky

Authors: Kenneth B. Johnson
Categories: Biography & Autobiography
Many stories abound of the daring exploits of the RAF’s young fighter pilots defying the might of Hitler’s Luftwaffe, and of the dogged courage of the men o

Authors: Sue Heavenrich
Categories: Juvenile Nonfiction
Earth zips through space at thousands of miles an hour! So, why aren’t we lost in a distant galaxy? Become a sky spy and find out! In Super Science: Sky Spies

Spies in the Sky

Spying from the Sky

Authors: Robert Richardson
Categories: Biography & Autobiography
The history of Cold War reconnaissance in the words of the man who proved the aircraft, commanded the units, and flew the missions. This is the biography of pil

Authors: David Baker
Categories: Juvenile Nonfiction
Discusses the history of surveillance from the sky and describes the development of different types of reconnaissance aircraft and their uses since World War II

Surveillance and Terror in Post-9/11 British and American Television

Russia's War on Everybody

Authors: Keir Giles
Categories: Political Science
You may not be interested in Russia. But Russia is interested in you. Russia's 2022 attack on Ukraine saw confrontation between Moscow and the West spill over i