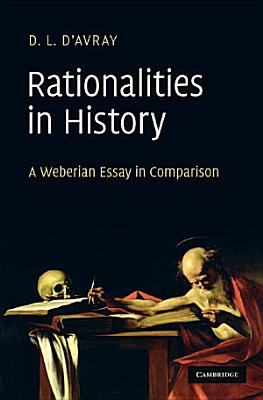 In Rationalities in History the distinguished historian David d'Avray writes a new comparative history in the spirit of Max Weber. In a strikingly original reassessment of seminal Weberian ideas, d'Avray applies value rationality to the comparative history of religion and the philosophy of law. Integrating theories of rational choice, anthropological reflections on relativism, and the recent philosophy of rationality with Weber's conceptual framework, d'Avray seeks to disengage 'rationalisation' from its enduring association with Western 'modernity'. This mode of analysis is contextualised through the examples of Buddhism, Imperial China and sixteenth-century Catholicism - in the latter case building upon unpublished archival research. This ambitious synthesis of social theory and comparative history will engage social scientists and historians from advanced undergraduate level upwards, stimulating interdisciplinary discourse, and making a significant contribution to the methodology of history. D'Avray explores the potential of this new Weberian analysis further in his companion volume, Medieval Religious Rationalities.

Authors: Jakob Bek-Thomsen
Categories: Philosophy
This book concentrates upon how economic rationalities have been embedded into particular historical practices, cultures, and moral systems. Through multiple ca

Authors: D. L. d'Avray
Categories: History
Inspired by the social theories of Max Weber, David d'Avray asks in what senses medieval religion was rational and, in doing so, proposes a new approach to the

Authors: I.C. Jarvie
Categories: Social Science
Anthropology revolves round answers to problems about the nature, development and unity of mankind; problems that are both philosophical and scientific. In this

Between History and Method

Authors: S. Amsterdamski
Categories: Science
In this book I have tried to develop further the ideas expressed in my previous work, Between Experience and Metaphysics, which was published in the same series

The Rationality of History

Authors: Peter Iver Kaufman
Categories:
This book is a printed edition of the Special Issue "Charisma, Medieval and Modern" that was published in Religions

Development and Its Rationalities

Rationality and the History of Linguistics

Authors: Dominique Janicaud
Categories: History
These essays offer a preliminary reconnaissance of this terrain which philosophy must make its new and rightful home.