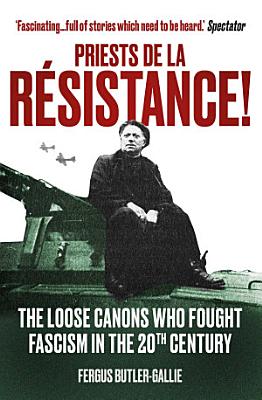 ‘A hugely enjoyable, eccentric account of clerical heroism in the face of evil.’ Observer ‘Comedy and tragedy run side by side… Bracing and lively.’ The Times ‘An admiring study of priests and ministers who have put their lives on the line.’ BBC History Magazine Who says you can't fight fascism in a cassock? Wherever fascism has taken root, it has met with resistance. From taking a bullet for a frightened schoolgirl in Alabama to saving Greek Jews from extermination by way of fake IDs, each of the fifteen hard-drinking, chain-smoking clerics featured in this book were willing to risk their lives for what they believed.

Authors: The Revd Fergus Butler-Gallie
Categories: Biography & Autobiography
‘A hugely enjoyable, eccentric account of clerical heroism in the face of evil.’ Observer ‘Comedy and tragedy run side by side… Bracing and lively.’ T

Authors: Guillaume Zeller
Categories: History
At the Nazi concentration camp Dachau, three barracks out of thirty were occupied by clergy from 1938 to 1945. The overwhelming majority of the 2,720 men impris

Fighters in the Shadows

Authors: A. Knapp
Categories: Political Science
France's liberation was expected to trigger a decisive break both with the Vichy régime and with the pre-war Third Republic. What happened was an untidy patchw

Authors: CATHERINE PEPINSTER
Categories: Religion
Since the early days of Christianity, martyrdom has had a particularly honoured place, and 2020 will see the Catholic Church marking the fiftieth anniversary of

Authors: Charles E. Miller
Categories: Fiction
There is no available information at this time.

Priest and Parish in Eighteenth-Century France

Authors: Timothy Tackett
Categories: Religion
This book provides a comprehensive collective biography of the parish priests in one diocese--their origins, education, and careers: their relationship with the

The Chankas and the Priest

Authors: Sabine Hyland
Categories: Social Science
How does society deal with a serial killer in its midst? What if the murderer is a Catholic priest living among native villagers in colonial Peru? In The Chanka