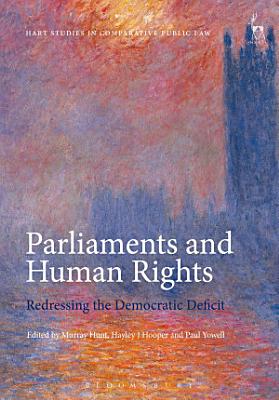 In many countries today there is a growing and genuinely-held concern that the institutional arrangements for the protection of human rights suffer from a 'democratic deficit'. Yet at the same time there appears to be a new consensus that human rights require legal protection and that all branches of the state have a shared responsibility for upholding and realising those legally protected rights. This volume of essays tries to understand this paradox by considering how parliaments have sought to discharge their responsibility to protect human rights. Contributors seek to take stock of the extent to which national and sub-national parliaments have developed legislative review for human rights compatibility, and the effect of international initiatives to increase the role of parliaments in relation to human rights. They also consider the relationship between legislative review and judicial review for human rights compatibility, and whether courts could do more to incentivise better democratic deliberation about human rights. Enhancing the role of parliaments in the protection and realisation of human rights emerges as an idea whose time has come, but the volume makes clear that there is a great deal more to do in all parliaments to develop the institutional structures, processes and mechanisms necessary to put human rights at the centre of their function of making law and holding the government to account. The sense of democratic deficit is unlikely to dissipate unless parliaments empower themselves by exercising the considerable powers and responsibilities they already have to interpret and apply human rights law, and courts in turn pay closer attention to that reasoned consideration. 'I believe that this book will be of enormous value to all of those interested in human rights, in modern legislatures, and the relationship between the two. As this is absolutely fundamental to the characterand credibility of democracy, academic insight of this sort is especially welcome. This is an area where I expect there to be an ever expanding community of interest.' From the Foreword by the Rt Hon John Bercow MP, Speaker of the House of Commons

Authors: Murray Hunt
Categories: Law
In many countries today there is a growing and genuinely-held concern that the institutional arrangements for the protection of human rights suffer from a 'demo

Authors: Subhash C. Kashyap
Categories: Civil rights
Study focusing on the actual role of the parliament in the field of human rights in India.

Parliaments and the European Court of Human Rights

Authors: Jonathan Cooper
Categories: Law
This volume is a compendium of the United Kingdom's Parliamentary debates on The Human Rights Act of 1998, one of the most far- reaching pieces of legislation o

Parliament and the Law

Authors: Alexander Horne
Categories: Law
The third edition of Parliament and the Law presents a timely and valuable resource covering recent developments. Brexit, the #MeToo movement, and the COVID-19

Freedom of Speech for Members of Parliament in Tanzania

Authors: C. Jesse
Categories: Political Science
This book is an appraisal of law and practice in light of International Human Rights Law and Best Practices book is essential reading for anyone who wants to gr

Summary Records of the ... Inter-parliamentary Conference