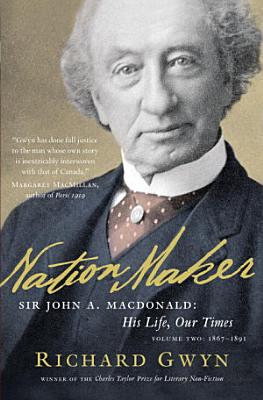 #1 NATIONAL BESTSELLER An exciting story, passionately told and rich in detail, this major biography is the second volume of the bestselling, award-winning John A: The Man Who Made Us, by well-known journalist and highly respected author Richard Gwyn. John A. Macdonald, Canada's first and most important prime minister, is the man who made Confederation happen, who built this country over the next quarter century, and who shaped what it is today. From Confederation Day in 1867, where this volume picks up, Macdonald finessed a reluctant union of four provinces in central and eastern Canada into a strong nation, despite indifference from Britain and annexationist sentiment in the United States. But it wasn't easy. The wily Macdonald faced constant crises throughout these years, from Louis Riel's two rebellions through to the Pacific Scandal that almost undid his government and his quest to find the spine of the nation: the railroad that would link east to west. Gwyn paints a superb portrait of Canada and its leaders through these formative years and also delves deep to show us Macdonald the man, as he marries for the second time, deals with the birth of a disabled child, and the assassination of his close friend Darcy McGee, and wrestles with whether Riel should hang. Indelibly, Gwyn shows us Macdonald's love of this country and his ability to joust with forces who would have been just as happy to see the end of Canada before it had really begun, creating a must-read for all Canadians.

Authors: Sarah Gibson
Categories: Literary Collections
To coincide with the bicentennial of Sir John A. Macdonald's birth, this is the first-ever selected collection of his most important and defining speeches. Publ

Authors: Patricia Phenix
Categories: Biography & Autobiography
The first book to expose the turbulent personal life of this fascinating Father of Confederation. Prime Minister Sir John A. Macdonald once remarked, “I had n

John A. Macdonald: The old chieftan

Authors: Ged Martin
Categories: Biography & Autobiography
This special 2-book bundle contains a number of perspectives on a man who was arguably Canada’s most famous political leader, a figure of legendary proportion

Life of the Right Hon. Sir John A. Macdonald