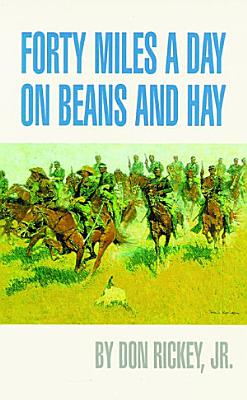 The enlisted men in the United States Army during the Indian Wars (1866-91) need no longer be mere shadows behind their historically well-documented commanding officers. As member of the regular army, these men formed an important segment of our usually slighted national military continuum and, through their labors, combats, and endurance, created the framework of law and order within which settlement and development become possible. We should know more about the common soldier in our military past, and here he is. The rank and file regular, then as now, was psychologically as well as physically isolated from most of his fellow Americans. The people were tired of the military and its connotations after four years of civil war. They arrayed their army between themselves and the Indians, paid its soldiers their pittance, and went about the business of mushrooming the nation’s economy. Because few enlisted men were literarily inclined, many barely able to scribble their names, most previous writings about them have been what officers and others had to say. To find out what the average soldier of the post-Civil War frontier thought, Don Rickey, Jr., asked over three hundred living veterans to supply information about their army experiences by answering questionnaires and writing personal accounts. Many of them who had survived to the mid-1950’s contributed much more through additional correspondence and personal interviews. Whether the soldier is speaking for himself or through the author in his role as commentator-historian, this is the first documented account of the mass personality of the rank and file during the Indian Wars, and is only incidentally a history of those campaigns.

Forty Miles a Day on Beans and Hay

Authors: Don Rickey
Categories: History
The enlisted men in the United States Army during the Indian Wars (1866-91) need no longer be mere shadows behind their historically well-documented commanding

Forty Miles a Day on Beans and Hay. The Enlisted Soldier Fighting the Indian Wars. [With Plates.].

Forty miles a day on beans and hay; the enlisted soldiers fight the Indian wars

FORTY MILES A DAY ON BEANS AND HAY.

Forty Miles a Day on Beans and Hay

Daily Life of U.S. Soldiers: From the American Revolution to the Iraq War [3 volumes]

Authors: Christopher R. Mortenson
Categories: History
This ground-breaking work explores the lives of average soldiers from the American Revolution through the 21st-century conflicts in Afghanistan and Iraq. • Pr

Authors: Ivan Doig
Categories: Fiction
Teaching voice lessons to the privileged members of society during the height of the Harlem Renaissance, Susan Duff is hired by a man who once harbored politica

John M. Schofield and the Politics of Generalship

Authors: Donald B. Connelly
Categories: History
In the first full biography of Lieutenant General John McAllister Schofield (1831-1906), Donald Connelly examines the career of one of the leading commanders in

A Dose of Frontier Soldiering

Authors: E. A. Bode
Categories: History
Emil Adolph Bode, a German immigrant down on his luck, enlisted in the U.S. Army in 1877 and served for five years. More literate than most of his fellow soldie