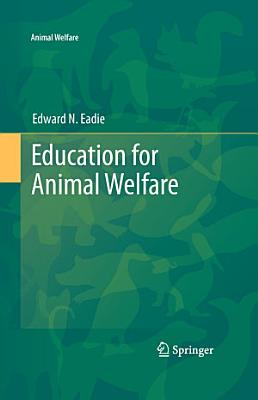 This book deals with the role of education in improving animal welfare and reducing animal suffering inflicted by humans. It embraces situations in which humans have direct control over animals or interfere directly with them, but it considers also indirect animal suffering resulting from human activities. Education is regarded in the broad sense of creating awareness and facilitating change. First, consideration is given to a number of specific themes in which education can make an important contribution towards reducing animal suffering, and subsequently an examination is made of a number of interrelated contexts in which education can address the various themes. The considered educational themes are: · animal suffering and sentience that have both scientific and moral aspects · human discrimination against animals known as speciesism and the need for attitudinal change by humans · role and existing limitations of legislation in providing protection to animals · matter of enforcement of animal protection legislation · achievement of reform to improve animal protection by legislative and other means · training of professionals, carers, and users involved with animals to provide better protection · the scope for science to contribute to improved animal protection · animal protection as a regional and international issue