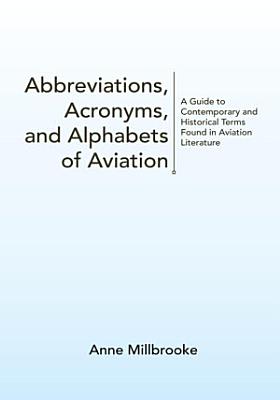 Intended for anyone who reads aviation literature, this guide contains over 12,000 shorthand expression used in aviation, past and present. The coverage is inclusive of general and technical terms, civil and military, also aeronautical, bureaucratic, commercial, geographical, mechanical, medical, meteorological, operational, and organizational terms — as related to aviation. All the abbreviations, acronyms, and alphabets — contractions or shorthand expressions, including mnemonics and even codes — were found in current and past aviation literature, including articles, books, charts, handbooks, manuals, maps, placards, weather reports, and notices to airmen. Often terms appeared without definition, in the apparent assumption that the meaning was general knowledge, and it may have been to the intended audience at that time. Many of the expressions stand for more than one thing, like MEL being "minimum equipment list" or "multi-engine landplane." TC could be "top of cylinder," "training center," "Trans Caribbean Airways," "Transport Canada," "transportation corps," "troop carrier," "tropical cyclone," "true course," "turbocharged," "turn coordinator," or "type certificate" — depending upon the context. Annotations in this volume are to help identify context. Some annotations place terms in time; for example, when did AFCC refer to the Air Force Combat Command, when to the Air Force Communications Command, and when to Air Force Cyberspace Command?

Abbreviations, Acronyms, and Alphabets of Aviation

Authors: Anne Millbrooke
Categories: Reference
Intended for anyone who reads aviation literature, this guide contains over 12,000 shorthand expression used in aviation, past and present. The coverage is incl

The Translation of Realia and Irrealia in Game Localization

Authors: Silvia Pettini
Categories: Language Arts & Disciplines
This book explores the impact of a video game’s degree of realism or fictionality on its linguistic dimensions, investigating the challenges and strategies fo